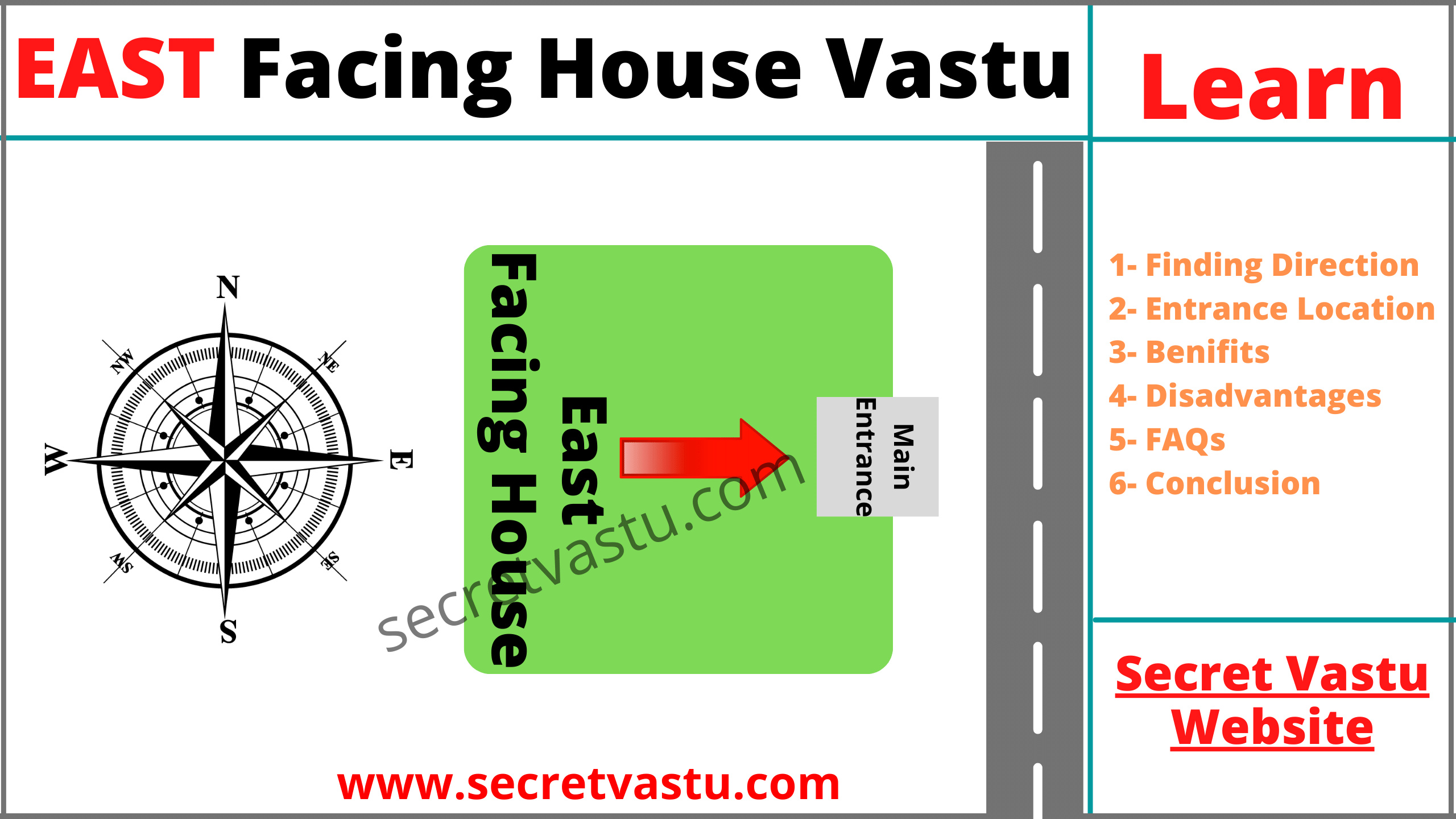 The East direction symbolizes life as the sun rises from this direction and is said to bring positive energy into your home. That is why, east facing houses are the second most preferred houses (first one being north oriented ones) by most of the people.

But, unlike the popular belief, the East facing property may not be very auspicious, if it is not constructed as per the guidelines of vastu shastra. Therefore, simply having an East facing house is not sufficient enough to consider it favorable.

However, there are certain benefits of having an East facing house which can’t be denied. One of the most important reasons why east and north facing houses are considered more vastu compliant is that the placement of each and every room in their proper vastu zones is a lot easier in an east or north facing house than a south or west oriented house.

So, it’s the placement of the main entrance and location of all the rooms that has to be taken into consideration while making a vastu compliant house.

Things You Are Going To Learn Further:

1- WHAT IS AN EAST FACING HOUSE?

2- FINDING THE DIRECTION OF THE HOUSE

3- THE PLACEMENT OF MAIN DOOR/ENTRANCE

WHAT IS AN EAST FACING HOUSE?

It is the very first step to identify the house orientation in order to make it vastu compliant. As per the vastu shastra ‘the facing of a house’ refers to the direction in which the main entrance of a house is located. So, if you are facing East direction while stepping out of the main entrance, it will be considered an East facing house.

The direction of the main entrance of your house is an important consideration. It is the main entrance from where the cosmic energy enters into a house which plays a vital role in the lives of the occupants of that house.

There are some very important vastu principles that need to be carefully followed in order to make your house vastu compliant.

FINDING THE DIRECTION OF THE HOUSE–

Finding the facing of your house is extremely important as a difference of even 3-4 degrees will make the entire calculation of 16 vastu zones inaccurate and then it will be difficult for you to find out the root cause of the problems. (Here is the full article link - @FindingTheDirectionofYourHouse)

Finding the accurate facing of the house is not a rocket science. All you need to do is to follow these steps:

While Using A Compass, Make Sure To Remember The Following:

THE PLACEMENT OF MAIN DOOR/ENTRANCE–

The main entrance of the house holds a very important place in the vastu. It connects a home to the cosmic consciousness. Since it is the main entry point for the cosmic energy into any building, it plays a vital role in the lives of the inhabitants of that building.

According to vastu shastra there are 32 gates out of which 9 gates are considered very auspicious and 2 out of these 9 gates are located in the East direction.

As you can see in the picture, we have highlighted the most beneficial gates in the green color for an East facing house. (More on Main Gate Vastu - @MainGateVastu)

1- The main entrance in an East facing house should be placed in E3 (Jayanta) or E4 (Indra) Padas. E3 Pada brings in wealth and prosperity and E4 helps you making connections with top level government officials.

2- Keep the North and East side of your house more open than South and West. It provides amazing growth and overall prosperity to the occupants of the house. (Here is the Full Article Link on Money - @MoneyVastu)

3- South-East (SE) is the best option for constructing the kitchen. The kitchen can also be located in the North-West (NW) zone.

4- You can have a Pooja room (prayer room) in the North-East zone since it is considered one of the most sacred and pious vastu zone.

7- Sun is by far the most important source of almost all life on earth and East is the direction in which sun rises. Therefore, having a garden in the east direction will attract positive energies into your house.

2- Septic tank and Toilet must not be placed in the North-East (NE) corner of the house. Placement of a toilet in this zone will cause major health issues like neurological problems, memory loss and even paralysis.

3- Staircase in North-East (NE) is not recommended as per vastu.

4- Avoid a plot that slopes from North to South.

5- The walls in the North and East direction should not be higher and thicker than South and West.

6- The main building structure should not be constructed in the North and East direction. These two directions must be left open as far as possible.

7- According to the rules of vastu shastra, cut in the North-East (NE) corner is a strict no. It is a major vastu defect which must be cured on priority.

8- Avoid dark colors and shades, such as dark red and dark blue, which produce a dreary and gloomy effect.

9- Placement of Master bedroom and kitchen in the North-East zone should be avoided.

10- Having underground water source in the South-West zone is not advisable as it may lead to calamities. 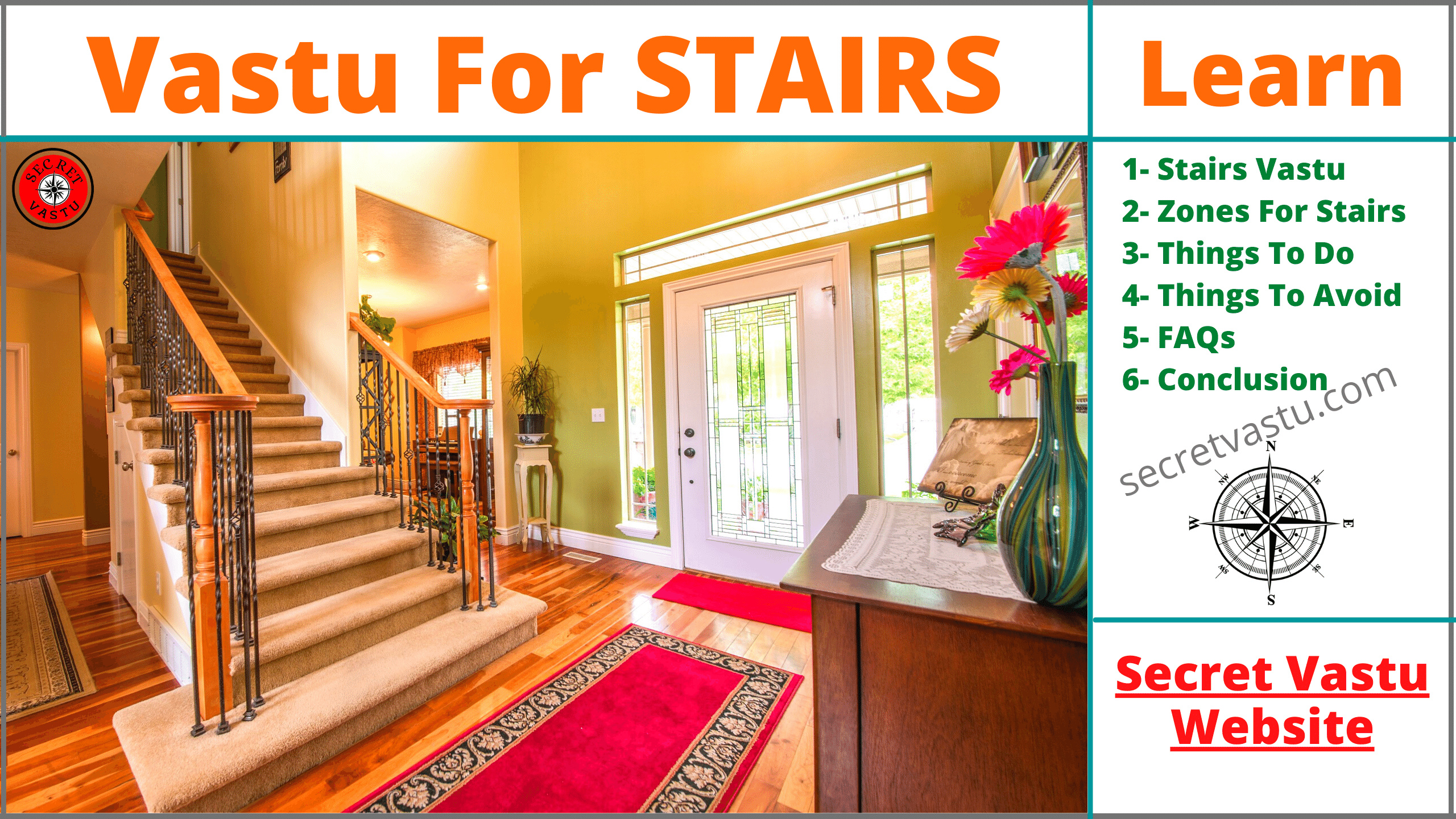 Studies have shown that a stair which does not comply with vastu principles leads to frequent ...

Hello sir, Does this vastu principles of residnential property applicable only for open plots or applicable for individual apartments in highrise towers as well, if not then what principles to follow while choosing apartments in such towers. Regards, Harsh Manek

Hello Harsh Ji, these vastu principles are universal. They are applicable on individual houses as well as individual apartments in highrise towers. You should follow all the basic vastu rules in the process of selecting an apartment. However, correct main entrance location and toilet [NE toilet is a strict no] location are two of the most important factors that you should always keep in your mind while choosing an apartment.

Namaste.... came across your article while searching for some Vaastu tips to improve my house environment and energies. My flat is exactly as in your pic shown but the main door is placed between W7 & W8. So it opens inside towards east...... is there any way to improve financial flow into the house? Also, I was asked to place a red frame mirror across the room facing the main door..... is this good / bad? Will it be good idea to hang a money plant outside the main door?? I have money plants growing in the east - south direction. Hope to hear from you soon! Regards, Ruchi

Ruchi Ji, W-7 & W-8 entrances are not good. It may cause loss of wealth and general happiness in the family. You should get it rectified. As far as other vastu aspects of your house are concerned, I would need to check the floor plan and only then I can give you appropriate suggestions. NOTE: Merely hanging a money plant outside the main door will not give you positive results. However, having greenery in the east direction is good.

Hello, i came across your page and it is very detailed and knowledgeable. I am struggling since last 2 years to find vastu compliant house in USA and had to lose so many good houses because of this reason. Is there something i can do about it?