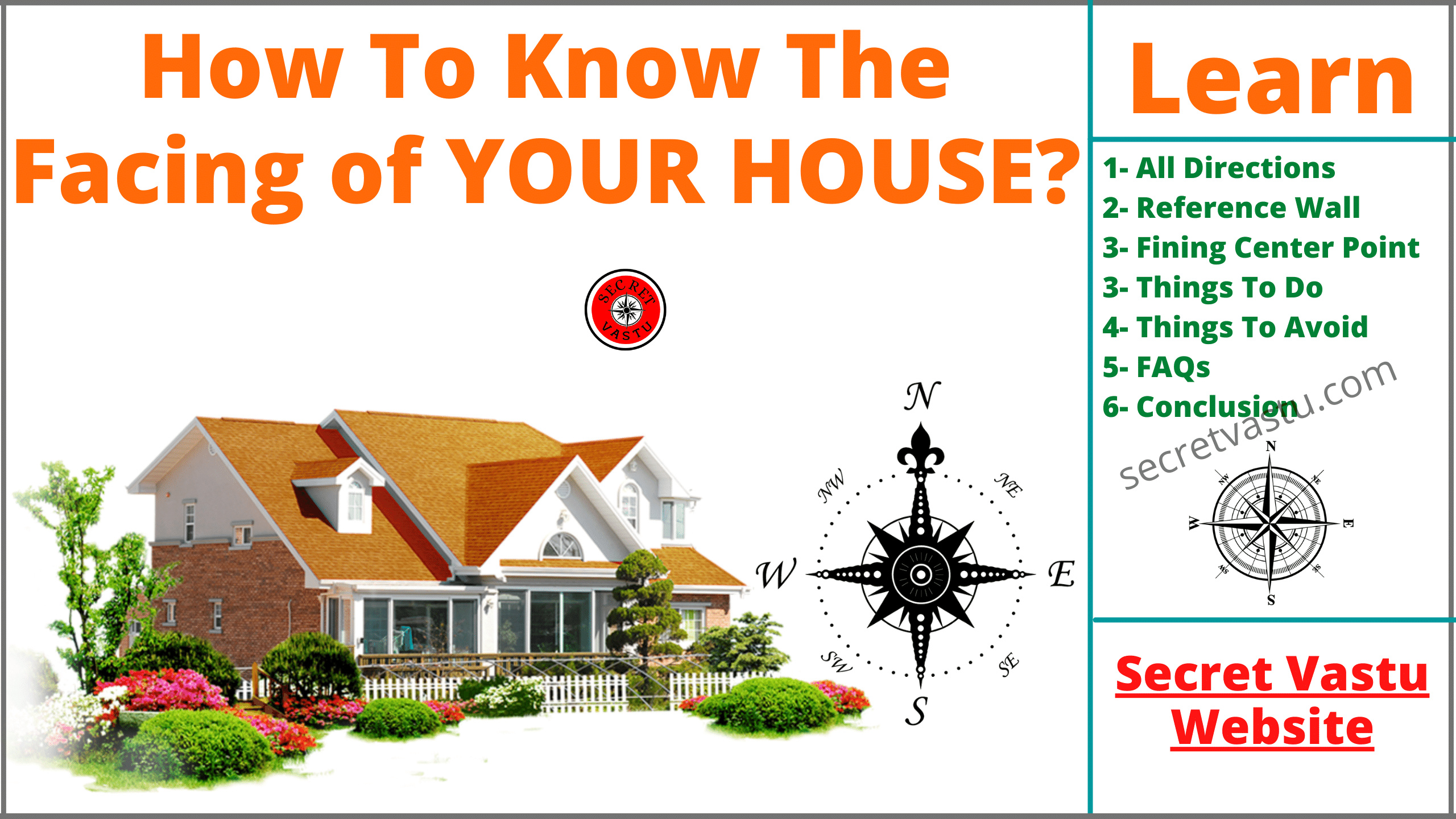 In Vastu Shastra, one of the most frequently asked question is how to use the compass to find the facing of the house? It is an important question because the ancient building science of vastu shastra is entirely direction-based and directions in vastu shastra are held as the energy centers.

Therefore, if your compass reading is inaccurate then you cannot make your house vastu compliant as a difference of even 3-4 degrees will make the entire calculation of 16 vastu zones completely wrong. It will also make it difficult for you to uncover the root cause of the problems.

Hence, in order to apply all the vastu principles properly you need to find out the accurate directions of your house. It can be a very confusing and difficult task in the beginning to determine the directions.

But, if you follow the vastu guidelines carefully you will find out that it is not a rocket science. So without any delay, let’s dive right in and learn the easy and simple method of Secret Vastu to determine the directions of your property.

This Article Will Explain The Following Things:

2- THINGS TO KEEP IN MIND WHILE USING THE COMPASS

5- IMPORTANCE OF ALL CARDINAL AND ORDINAL DIRECTIONS

In order to learn how a compass works, you must find out what a compass is.

In the olden days people used to see the shadow of the sun to determine the directions. In the modern and technologically advanced world we can use the magnetic device called compass to check the directions very minutely.

Basically compass is a device with a magnetic needle that helps us to find out the directions relative to the Earth’s magnetic poles.

This magnetic needle is balanced on a nearly frictionless pivot point. The one end of the compass needle is usually colored in red or green color or marked with ‘N’ to indicate that it points toward North direction.

The one end of the needle in the magnetic compass aligns itself with the earth’s magnetic field that means it will always point towards the magnetic North of the earth which is different from the geographic North.

When it comes to choosing a compass you can always go with a magnetic compass that gives you a degree number from 360°/0° to 359°. However, if you don’t have a standard magnetic compass, you can also use the compass app on your smartphone to find out the facing or direction of your property.

2- THINGS TO KEEP IN MIND WHILE USING THE COMPASS-

While using a compass, you need to remember some important tips which are as follows:

Finding the facing of your house is very easy and simple. All you need to do is to follow these steps:

Now the next most important step is to grid the map of your house and locate the main entrance as well as mark all the 16 vastu zones on your floor plan. But before we do that we need to find out the exact center point of the house. (Click Here To Read- @moneyvastu)

FINDING THE CENTER POINT OF THE HOUSE ON THE MAP-

As you can see in the picture given below, mark all the four corners of your house as point A, B, C and D. Now draw a line from point A to C and B to D. The point where these two lines are crossing each other is the exact center point of your house.

But if there is a cut or extension in any corner of your house, then draw an imaginary line to make the house square or rectangular. After that, mark all the corners as point A, B, C and D. Then draw a line from A to C and B to D. This crossing point of these two lines will be the center point of your house.

LOCATING THE MAIN ENTRANCE ON YOUR FLOOR PLAN-

Each entrance creates its own effect but only few of them offers positive results to the occupants of the house.

MARKING ALL THE 16 VASTU ZONES ON THE MAP-

Once you have decided the vastu compliant entrance for your house, the next step would be to mark all the 16 Vastu Zones.

(Click Here To Read All Articles on House Vastu - @HouseVastu) 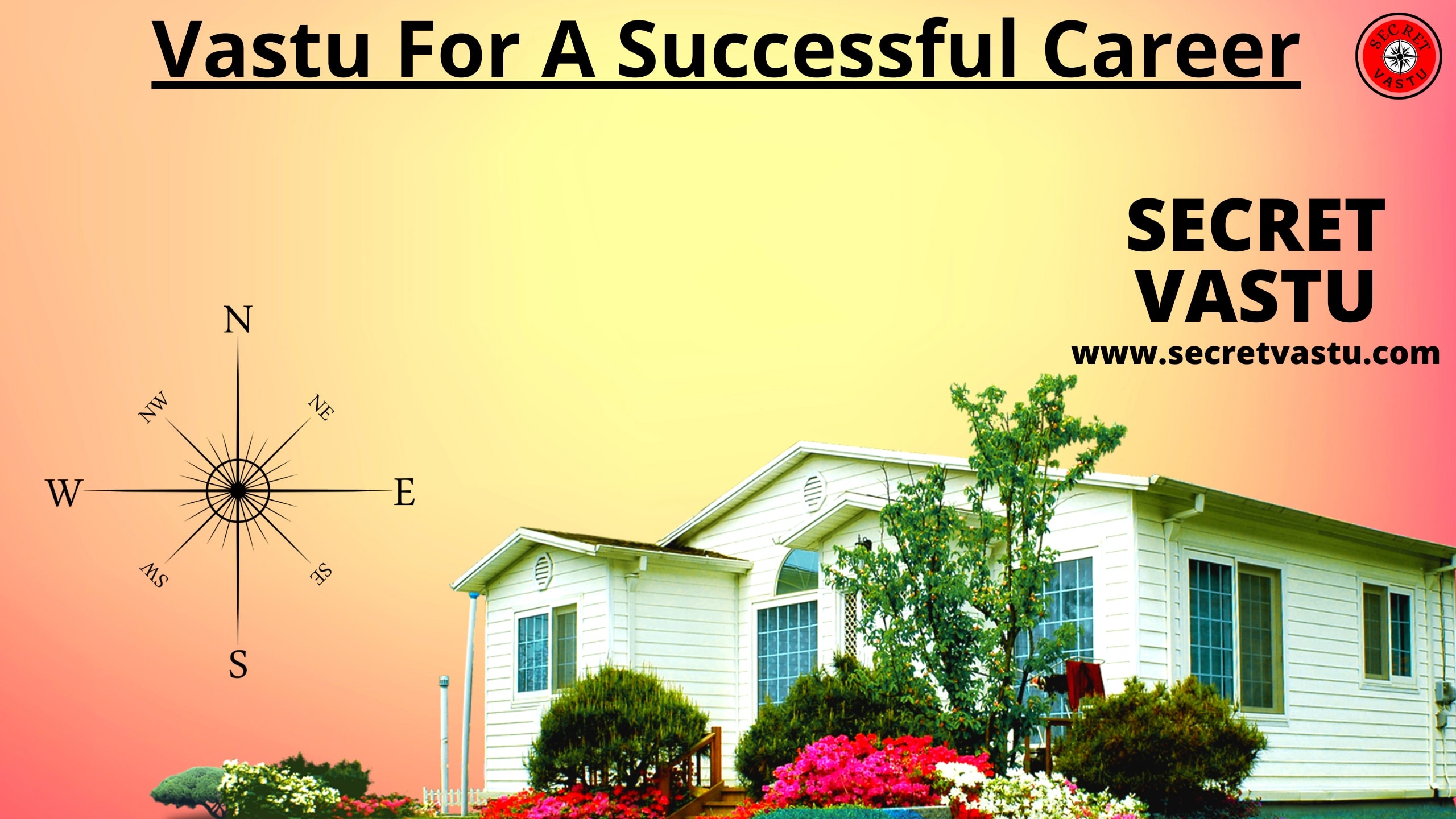 Vastu For A Successful Career| Vastu Tips For Job ...

There are plenty of unsuccessful people who are more gifted than their peers who went on to achieve ... 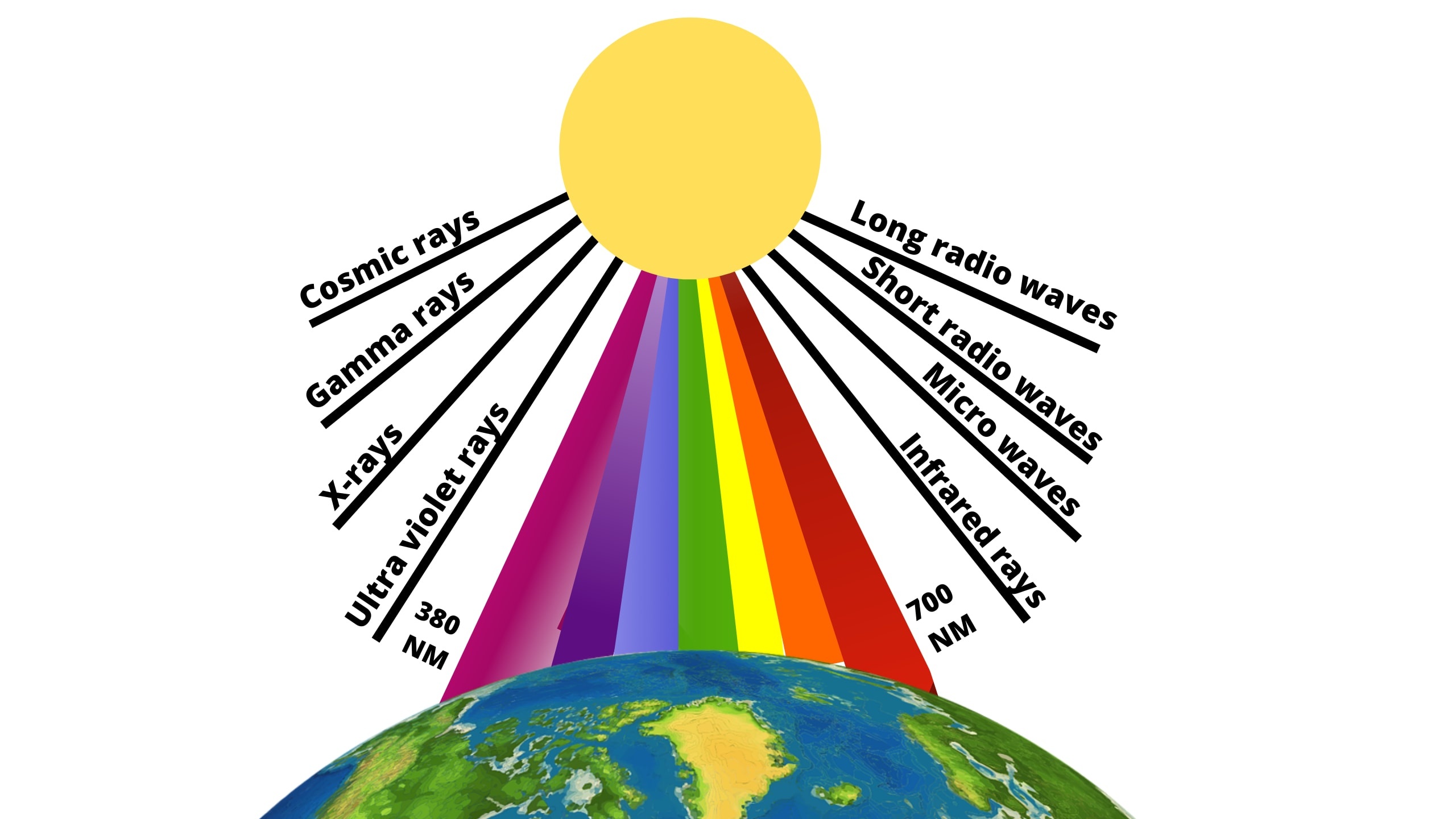 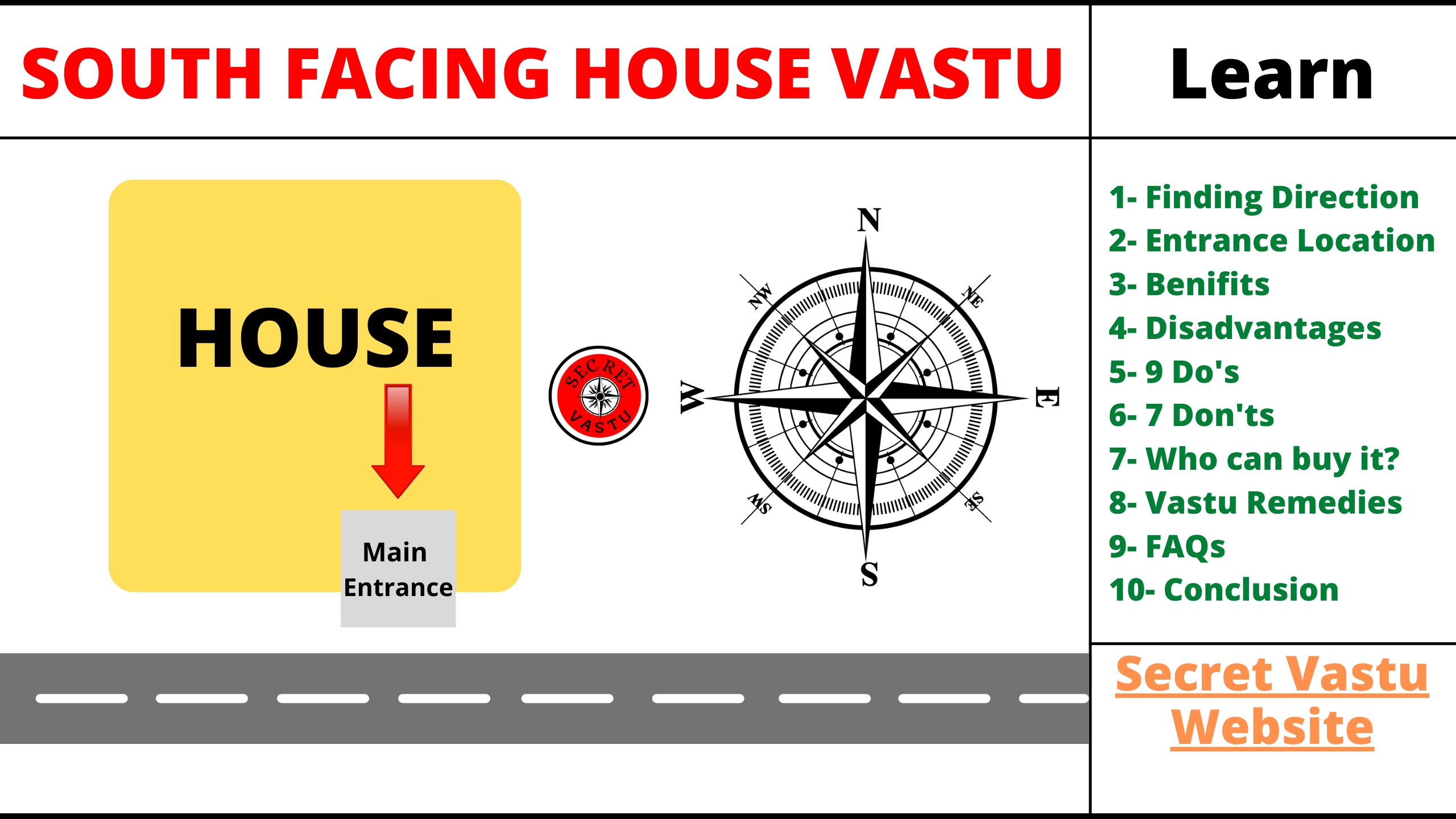 South Facing House Vastu| Everything You Need To ...

This is perhaps one of the biggest of all myths that a south facing house is highly inauspicious ...

Its a apartment on 5th floor, I am not able to decide the God's (Pooja room/cabinet placements)

Sitalaxmi ji, Generally, North-East, North and East directions are considered good for pooja room location. For details, you can check this article on pooja room- https://bit.ly/2KnySvP

Sir, I am looking for a property and liked it but problem is two attached toilet bathroom are coming in north east direction. Any suggestion apartment entry is in west facing.

Hello Vikrant Ji, any property which has a toilet in the North-East direction is considered very inauspicious even after appyling vastu remedy. So I would not suggest you to buy such property.

Hello Is the door facing at 100degree or east of south east is good ?

Hello Rajat Ji, 100 Degree main entrance means, your main gate is in E-5 [90°-101°]. It is not considered a favorable entrance for the residents. It will negatively affect your decision making power.

Hello Vijayalakshmi Ji, South facing house can be very auspicious, if some important vastu rules are properly followed. One of them is the location of the Main Entrance of your house. Main entrance in S-8 [between 214° to 225° on compass] is not considered good. It needs to be rectified. But, before that you need to make sure that your main entrance is in S-8.

Dear sir, my residence main door entrance is facing south west approximately at 211 degree. Is it ok to continue in this house which is on rental basis?

Hello Prasad Ji, the main entrance door of your house is at 211° as you have mentioned. It means this entrance is in Bhringraj Pada and it does not provide good results for the residents of the house. It can be rectified with some remedies, but since you are living there on rental basis, it would be a better and easier option for you to choose another house. So I would recommend you to opt for a new house which has a positive main entrance.

Namaste, Are houses with entrance at 235degrees OK? Please advise Thanks Deepa

Namaste Deepa Ji, houses with entrance at 235 degree are not considered good as per vastu. This entrance at 235° would be a W-1 entrance which is not recommended.

Hello, is attached garage in USA houses considered part of building to calculate padas for entrance placement? We have a west facing house. Thanks!

Sir... Should I check both main entrance and main door of the house while checking for good vastu and longevity

Shubha Ji, you should certainly check the vastu of both the entrances of your house.

Main door of our flat is N-W means when i am facing door from inside , compass shows north west. Is it okay ? We did interior for main entrance, which idols or any symbol can be used to decorate main door from outside.

Manimala Ji, NW [North-West] door means you have W-8 & N-1 entrances. These entrances are not considered favorable. They should be rectified.

I have a flat and main door is 238 or 240 degree (measured from two diff ph compass) WSW. Is it good auspicious and should I stay there? It’s a new flat , kindly advise

W-2 entrance [Dwarik] is not auspicious. It should be rectified.

Hello the compass is showing my house entrance at 338 Degree . Is it ok to have an entrance there ?

Prachi Ji, entrance between 337° to 349° is considered 'Mukhya' entrance and it is very good.

Hi Mr Kudi, I am based in Melbourne Aus and found out that have the toilet in the north east of the house.Unfortunately the house is built and it's not possible to shift the toilet anywhere else on the ground floor. What's the remedy to minimize the impact due to the toilet in north east. I can send out the plans. many thanks, Amar

Amar Ji, North-East zone toilet [W.C.] is not good. And its Vastu rectification may also not bring 100% result, but it will certainly minimize the impact. Please send us the floor plan of your house on this WhatsApp number- +91 93583-89567 and we will suggest you the appropriate remedy.

Nirav Ji, your house entrance at 276° means you have the 'Varuna' entrance according to vastu. It makes the person over ambitious. It is not a bad entrance, but it also does not bring much positive results until the other aspects of your home are vastu compliant.

Hello Sir, planning to buy flat in 12th storied apartment. Flat is facing NW 315 degrees. Have twonoption one with NE cut and having toilets in NE second is opposite ie cuts in south. Pls give me your email I'd to share complete layout with directions.

Hello Sir, you can share the details of your flat on this Email Id- [email protected]

My flats main door opens at 237 degree...is it good and if not pls suggest remedies

Chetan Ji, your house entrance is in Poosha & Vitatha pada. They are considered good entrances. Poosha is especially good for salaried people and Vitatha is also good entrance.

I want a clear and exact vasthu Plan for construction of a new house in my plot of. 16 guntas . please give me your contact information.

Hello Sir, when I put a compass at the front of the house near the main door it shows 166 degree south. Would that be ok ?? Or should be plan to move the front door ?

Jinal Ji, if the main entrance of your house is around 166° then it is ok.

Hi we are looking at house on rent and the one that we like, the entrance of one is 133 SE and other is 276 W . Which one will you suggest

Hello Kavita Ji, House with entrance at 276° is better. So go with the west facing house in this case.

Hello Sir, My house main door is pointing 142 degrees. Is it good?

Chitra Ji, 142° entrance is a South-East [S-1] entrance, which is not good. It should be rectified.

Sir my main door is facing east direction is it okay

When I walk into my drawing room from main gate, I am moving towards north direction. Is this direction OK for my home?

Dear sir my house door shows between 240 and 250 degree when measured from 1 wall and 2nd wall on main door. Is it okay as per vastu?